A Mechanical Exercise Tracking the Creation and Lifespan of Fiat Money 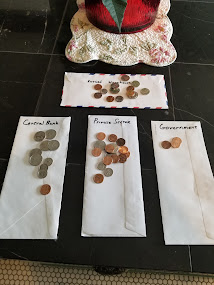 Here's a little mechanical exercise that tracks the creation and lifespan of fiat money. We use coins to identify paper or electronic financial instruments and the backs of used envelopes to represent sectors which own financial wealth. This exercise should be comforting for those who believe that money might have a physical reality but may seem unrealistic to those who think of money as being purely virtual.

Our stock of coins should include at least three different denominations. We need four envelopes to represent three financial sectors of an economy and a virtual storehouse.

I used quarters, dimes and pennies. Quarters were used as government bonds, dimes as mortgage-backed securities, and pennies as fiat money.

Mark the envelopes as "Central Bank", "Private Sector", "Government Sector", and "virtual storehouse". Later, we will trade our coins between these four storage surfaces.

How to run the exercise

Place all the coins on the virtual storehouse envelope. Then move a representative coin(s) to the appropriate sector envelope(s) as each financial transaction is contemplated.

We begin with all the coins on the virtual storehouse envelope, no coins on any sector envelope. This economy is not using fiat money.

Take some pennies from the virtual storehouse and place them on the private sector envelope. This economy is using fiat money. You may want to envision an intermediate condition wherein the bank or Government owns newly created fiat money, but money has not yet moved into private ownership. This to help understand the issue of seigniorage.

Consider the issue of government borrowing money from the central bank. The event causes the creation of fiat money, bank money, reserves, IOUs, or even 'ticketed access into the marketplace', with the descriptive name being dependent upon the framework being used to describe financial activity. If a bond is created as part of the creation process, take a quarter from the virtual storehouse as well as representative pennies, then move both instruments through the sequential ownerships until the long-term ownership condition is achieved. Probably, the bond will ultimately reside on the central bank envelope and the pennies on the private sector envelope,

Consider that government can borrow directly from the private sector.

After becoming comfortable with the flow of fiat money and other fiat instruments, a second exercise system can be created to represent a second currency. We might do this to consider how trade in currencies might establish relative currency values.

A starting point might be to consider why a government might want to borrow a second currency--one it could not create. What if a government borrowed this currency and distributed it to citizens via helicopter drop? I won't even begin to consider why such an event might occur but examples of governments borrowing foreign currency are readily found.

The creation and life of fiat money can be modeled using real physical objects. This exercise should help those who might be confused or dismayed by the complexities and details used by modern bank operations.

Comments are welcomed but are moderated. It may take awhile before they appear to be viewed by all.