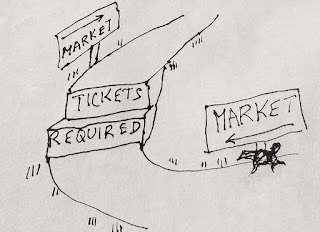 You don't need to be a banker to put together a logical theory of banking and money. You just need to lay all the clues into an interlocking order. We will try to do that in this article.

This becomes a story of banking and the creation of modern money. Printed money is not part of this story, nor is the valuation of money.

This is a follow-on for the recent post "A Mechanical Exercise Tracking the Creation and Lifespan of Fiat Money" (METC). In the original exercise, the user made all of the economic decisions. Private banks were money users. In this post, we introduce private banks into the role of decision-making for the process of creating money.

In METC, we needed a virtual storehouse to store real tokens that we could later call "money". Here we introduce a private bank's version of a virtual storehouse which is, of course, real all the time.
In the drawers of this new storehouse (Figure 1), we have existing money sources that the banks can use to ensure that new borrowers have access to existing money. So how is it that new fiat money can be created in this new version of METC? Private banks take systematic advantage of the pool of money on deposit by making a loan without linking loan risk or deferred spending to any one account. The loan is made by creating a deposit account for the borrower. Loan risk is spread to the entire body of depositors, including the lending bank. Deferred spending is transformed into accelerated spending. As a result of the loan, the amount of money on deposit in the banking system is measured as increasing. *
Read more »
Posted by Roger Sparks at 2/04/2022 07:10:00 AM 4 comments: